Some 57 African migrants bound for Europe have reportedly drowned off the Libyan coast.

Reports say among those dead are 20 women and two children.

The International Organization for Migration (IOM) says the migrants died after their boat capsized.

Their boat is said to have capsized near the Libyan port of Khoms is unclear. 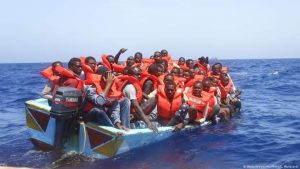 Ivory Coast’s Gbagbo is due to meet Ouattara today