Police in the Ashanti Region have killed three suspected armed robbers and arrested one other.

The police, in a statement, said the command, on Thursday, November 4, 2021, undertook an intelligence-led operation that resulted in the arrest of one robbery suspect and the death of three other suspects who sustained gunshot wounds during the operation.

The police said it mounted a search and screening operation based on its intelligence that a gang planned to rob a businessman at Buokom Estate.

According to the statement, during the search, the four suspects, all in a car, attempted to fire at the police, who, in turn, returned fire.

Three of the injured suspects died at the Komfo Anokye Teaching Hospital.

The police recovered a pump-action gun, one revolver pistol, one locally manufactured pistol, one dagger, two black hoods, two pairs of scissors and some dried leaves suspected to be cannabis from the suspects.

“As we seek to combat crime in our communities and make it an unattractive venture, we will continue to count on the support and help of the public”, the statement said. 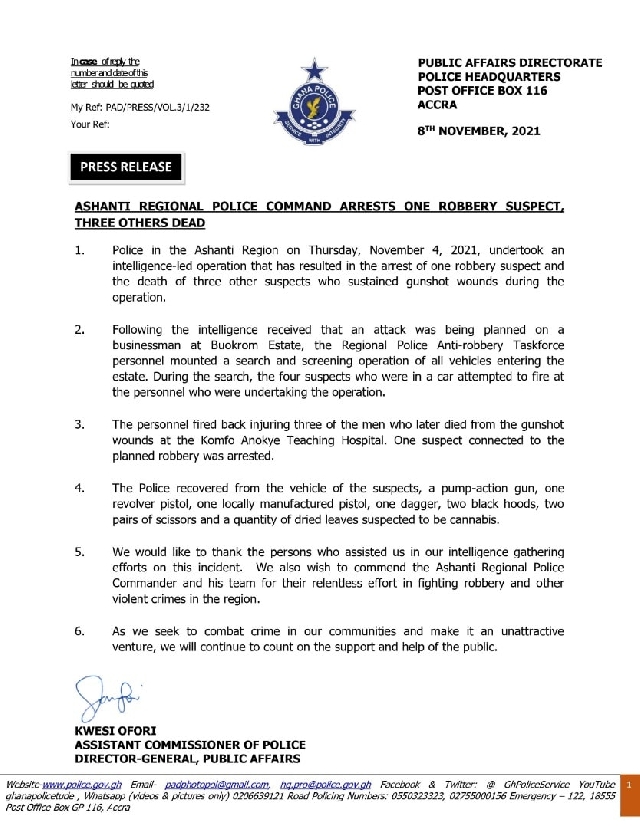 Six Journalists involved in a near-deadly accident in Eastern Region

Six Journalists involved in a near-deadly accident in Eastern Region

Deal with Criminals, instead of Spiritual matters – Xavier Sosu to Police