A District court at Agogo in the Ashanti region presided over by Mr. George Kwasi Ofori, has remanded 79-years- old Francis Obeng Amoako and five other persons into police custody for allegedly inserting a stick into the anus of a suspected juvenile thief before the camera.

The 16-year-old, suspected thief Kwaku Enoch, was allegedly caught after breaking into a shop at Agogo Market owned by the 79-year-old man.

The people after arresting the suspect failed to hand him over to the police but rather decided to kill him by inserting into his anus a stick,  an act is known in the local parlance as (Kofie ko wu) to wit go home and die.

The 79-year-old man who led the barbaric act against the suspected juvenile thief and five other accomplices have been remanded to reappear before the court on June 27, 2021, after the court declined their plea.

Residents who were shocked over the dastardly act on Thursday, thronged the court premises to catch a glimpse of the accusers and also observed the proceedings. 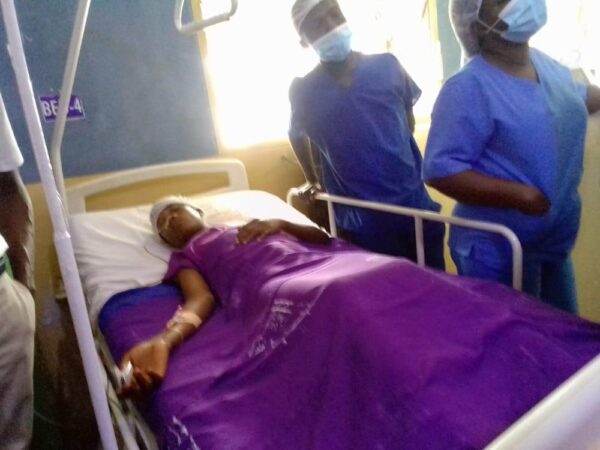 Police on July 9, 2021, the police at Agogo chanced upon a viral video where the suspects were seen inserting the stick into the anus of the victim with his hands and legs tied at the back.

According to the police, they identified the suspects to be residents of Agogo and the night patrol team picked them up.

The following day, July 10, 2021, the mother of the victim, Ms. Adwoa Oparebea, lodged a complaint about her missing son who happened to be the victim, aged 16, who she learned had been harmed by a group of people but could not find him to enable her to take him to the hospital.

The police said Mr. Amoako, who had confessed his involvement in the case, told the police that after inserting the stick into the victim’s anus, they untied him and removed the stick, and allowed him to go.

On July 11, 2021, the mother of the victim informed the police that she had located the son and he was alive so she was issued with a police medical form to take the victim to the hospital for treatment.

He said the police later visited the victim at the Agogo Presbyterian Hospital where he was on admission and responding to treatment.

Why Medikal was arrested; facts of the case

Why Medikal was arrested; facts of the case