There is an outbreak of the Highly Pathogenic Avian Influenza Disease (Bird Flu) in parts of Ghana, the country’s Ministry of Food and Agriculture has announced.

“The affected areas are the Greater Accra, Central and Volta Regions.

“The outbreak of the disease follows the detection of similar cases in neighbouring countries since January 2021”, the statement said. 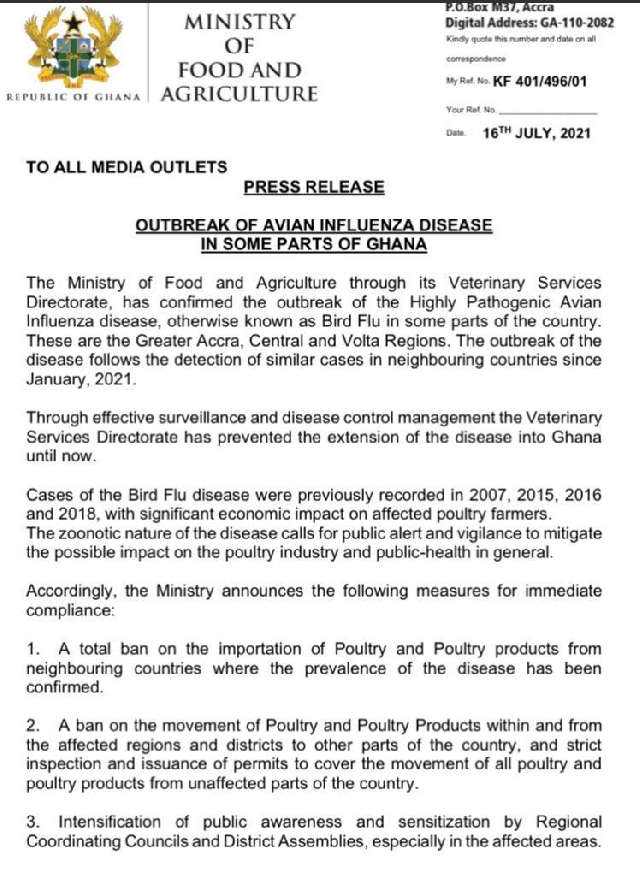 It noted that “through effective surveillance and disease control management, the Veterinary
Services Directorate has prevented the extension of the disease into Ghana until now.”

The statement recalled that cases of the Bird Flu disease were previously recorded in Ghana in 2007, 2015, 2016 and 2018 and had a devastating impact on farmers.

“The zoonotic nature of the disease calls for public alert and vigilance to mitigate the possible impact on the poultry industry and public health in general,” the statement noted.

The Ministry has outlined the following measures in dealing with the outbreak:

1. A total ban on the importation of poultry and poultry products from neighbouring countries where the prevalence of the disease has been confirmed.

3. Intensification of public awareness and sensitisation by Regional
Coordinating Councils and District Assemblies, especially in the affected areas.

To further ensure public safety, citizens are advised to:
i. Report any unusual death of domestic poultry and wild birds to the nearest Veterinary office and public authorities,

ii. Avoid the handling of dead birds with bare hands at all costs,

“The Ministry wishes to assure the general public that there is no cause for fear and panic, since the Veterinary Services Directorate is taking all necessary steps to contain the outbreak and spread of the disease to other parts of the country. The success of this call hinges on the full cooperation of the general public. For further enquiries, kindly contact Dr. Patrick Abakeh, Director Veterinary Services Directorate on phone number 020-8240734.”

Zuarungu Shooting: You have killed an innocent man – Family of alleged Robber

Zuarungu Shooting: You have killed an innocent man – Family of alleged Robber

Prof. Antwi Danso worried about use of military by REGSEC, DISEC in emergency situations