Speaking in an edited video provided to media outlets, Gen. Jorge Vargas alleged that newly obtained information from the ongoing investigation had led Colombian authorities to believe that Badio told two Colombians suspected to have been involved in the operation to assassinate President Jovenel Moise.
Vargas provided no evidence to support these claims against Badio, only reiterating that the information came from the joint commission of Colombian and Haitian authorities involved in the investigation. 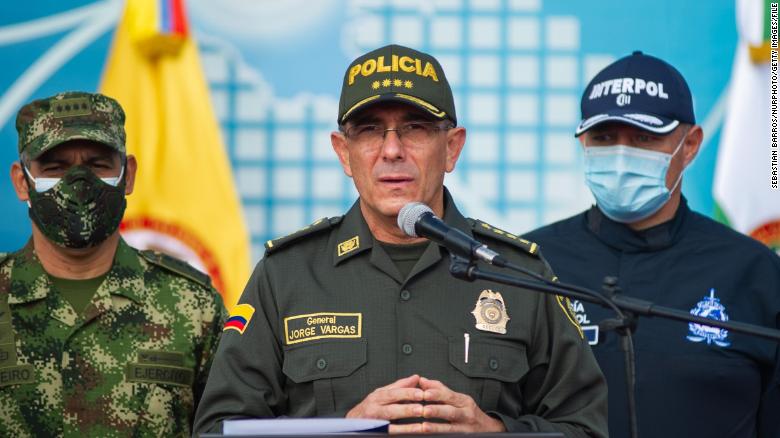 Related Articles
Moise was killed last Wednesday during an attack on his private residence, throwing Haiti into political chaos with multiple figures now vying to lead the Caribbean nation.
Authorities say the operation involved at least 26 Colombians, some former members of the Colombian military, hired through a Florida-based security company.
There were no reporters present in the room to ask questions to the Colombian police chief when he recorded the video.
Haiti’s elections minister Mathias Pierre told CNN on Friday that Badio, “is effectively in the heart of the assassination, but we believe he is working for big fishes. The intellectual masterminds are bigger than that. Who financed the operation is still the big question mark.”
Haitian authorities, including the acting Prime Minister Claude Joseph and Police Chief Leon Charles, also held a news conference Friday where they made no mention of Badio or the claims made by Colombia.
Badio was fired on May 17 from his position at the Haitian government’s Anti-Corruption Unit, according to a statement issued by the agency on July 13.
According to the statement, he was fired due to serious breaches in professional conduct. The statement also cited a complaint against Badio that had been filed on May 20 but did not disclose the content of the complaint.
The Port-au-Prince prosecutor’s office on Sunday issued an arrest warrant for Badio, CNN learned Friday. The warrant said Badio is accused of murder and armed robbery against President Moise.
CNN has not been able to reach out to Badio for comment and it is unclear if he has legal representation.

The FBI began holding interviews in Port-au-Prince on Friday as part of the investigation into President Moise’s assassination, a source familiar with the investigation told CNN.
On Monday, the Justice Department said it will “investigate whether there were any violations of US criminal law” in connection with the plot to assassinate Moise. Haitian authorities have provided limited details on the investigation, but the growing number of Florida connections to the plot appears to portray an operation at least partly hatched in the United States. 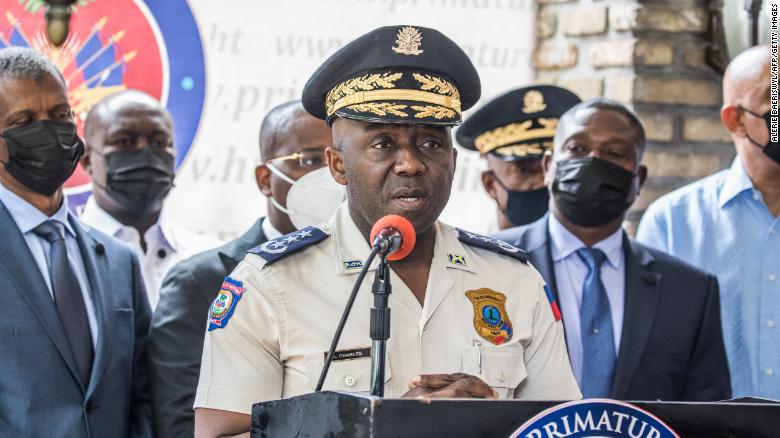 Haitian National Police Chief Léon Charles speaks during a press conference at Haitian Interim Prime Minister Claude Joseph’s residence on July 16, 2021, in Port-au-Prince.
Responding to a CNN question at a news conference on Friday, Haitian police chief Charles said both Colombian and American investigators had interviewed “key suspects” in the case. He also said that some of the 24 police currently under “precautionary measures,” which typically limit movement, had been at the presidential residence on the night of the assassination.
A senior government source with knowledge of the investigation told CNN: “We think four police officers were working with Badio to neutralize the police around President’s house to facilitate access. One police officer has been arrested, three are at large.”
The four officers are not part of the 24 who are under precautionary measures, and were not members of the president’s security team, according to the source. The officers appear to have been part of a group doing personal security for Badio, the source also said.

The aftermath of an assassination

Moise’s assassination sparked a sprawling ongoing investigation across multiple countries, supported by both the US FBI and Colombian intelligence services.
At least 39 people have been implicated in the killing of President Moise. Citing Haitian authorities, Colombian police said Thursday that some of the 26 Colombian suspects were hired and brought to Haiti on the understanding their job was to detain the leader and hand him over to US law enforcement.
A number of suspected killers were likely deceived by their compatriots, Colombian President Ivan Duque told a local radio station on Thursday. Preliminary investigation suggests the Colombians were working in two groups, he said: A smaller group who knew of a “criminal” objective and were aware the bigger operation was a cover-up and a larger group that had been kept in the dark.
The two Colombian suspects named in the video by Vargas are German Rivera and the late Duberney Capador. The pair, both former Colombian military officers, have been accused of leading the operation.
They previously met with Christian Emmanuel Sanon, a Florida-based pastor whom Haitian authorities allege coordinated the military operation in hopes of seizing power for himself, according to Vargas, the Colombian police chief.
Sanon has denied all knowledge of the operation and insisted on his innocence, according to a source close to the investigation who cannot be named because they are not authorized to discuss the affair.
Capador and at least two other Colombians were killed by Haitian authorities responding to the assassination.
Source: graphic
Tags
alleged Former Haitian justice official President's assassination
July 20, 2021
0 66 3 minutes read
Facebook Twitter LinkedIn Tumblr Pinterest Reddit VKontakte Share via Email Print

COVID-19: Only one in four African health workers fully vaccinated – WHO

WHO: Worst is still to come for Covid in Africa

COVID-19: Only one in four African health workers fully vaccinated – WHO

WHO: Worst is still to come for Covid in Africa

US to reopen borders to vaccinated travellers after 20 months