Controversial comedian Funny Face was Monday evening arrested by personnel from the Criminal Investigation Department of the Ghana Police Service during an interview on Kofi TV.

He was arrested a day after he allegedly threatened to shoot and kill his baby mama, Vanessa Nicole and then commit suicide.

The Cow & Chicken actor on Sunday shared a four-minute video of himself on Instagram slamming top personalities, Fada Dickson of Despite Media, footballer Emmanuel Adebayor, and media mogul, Bola Ray.

It was in the process he issued the threat.
According to him, Vanessa has been using their children as an excuse to extort money from him while threatening to shoot her.

He was also angry at her over his claims that she didn’t call him to check up on him after he had an accident while going to visit her and their kids.

“Your mother, Vanessa. I’ve already told you that I will shoot you. I’ll just shoot you and kill myself after that,” he said.

He was picked up on Monday at about 10:14 pm on Kofi TV and is currently in Police custody.

“Due to the history of the suspect, the police shall submit Benson Nana Yaw Oduro Boateng to the court for an order for psychiatric examination, to determine the next line of investigative action. The police are committed to protecting lives with the generous help of the public. We want to assure the public that we shall not take anything for granted in the interest of public safety,” the statement indicated. 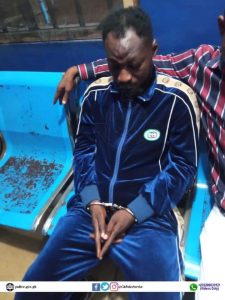 NDC in bed with Abronye’s contender to unseat him

2 youths allegedly shot in Lamashegu following a clash with Police

NDC in bed with Abronye’s contender to unseat him

2 youths allegedly shot in Lamashegu following a clash with Police

I’m Only Waiting For My Death – Joyce Dzidzor Mensah