The Deputy Minister of Trade and Industry, Hon. Herbert Krapa Esq. has, on behalf of the Government signed an Institutional Partnership Agreement for Germany and Ghana to collaborate on testing and standards development for construction materials and chemicals.

The signing took place on the sidelines of the Compact with Africa Meeting in Berlin, Germany on August 27, 2021.

The Joint Declaration of Intent (JDoI) was signed with the Federal Ministry for Economic Affairs and Energy of the Federal Republic of Germany (BMWi, the Federal Institute for Materials Research and Testing for Germany (BAM) and the Ministry of Trade and Industry and the Ghana Standards Authority (GSA) for Ghana, seeks the common aspiration to foster the economic and trade cooperation between both countries by implementing an Institutional Partnership between their government institutions. 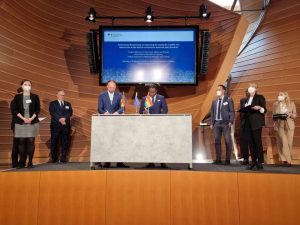 The JDoI was signed for the German Government by Mr Marko Wanderwitz, Parliamentary State Secretary and Prof Dr Ulrich Panne, President of BAM whilst Hon Herbert Krapa and Prof Alex Dodoo, Director-General of the GSA signed for the Government of Ghana.

Developing Corporate Governance Code must be an all-inclusive engagement – BoG

NLA to thrill Kwahu revelers with live draw at Obomeng

Developing Corporate Governance Code must be an all-inclusive engagement – BoG

NLA to thrill Kwahu revelers with live draw at Obomeng

We’ve to move from fossil fuels to renewables – VP Bawumia