A leading member of the New Patriotic Party (NPP), Gabby Otchere-Darko has expressed his opposition to the Proper Human Sexuality and Ghanaian Family Values Bill 2021 popularly known as the anti-gay bill.

Mr Otchere-Darko in a tweet said he was not shy to express his opposition to the bill, adding that as a proud Ghanaian he would defend the right of minorities everywhere.

“I am against the anti-gay bill & not shy to say so. I am a proud Ghanaian who cherishes all that is good about our value systems, including tolerance. And, I will defend the right of minorities everywhere. I have the courage and a sense of justice to disagree with the majority,” he tweeted. 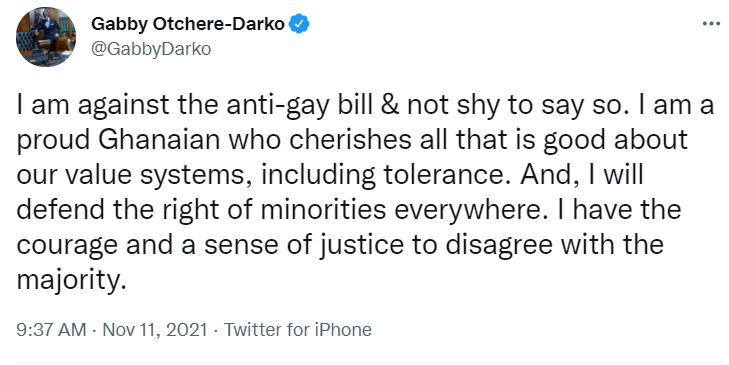 So far, the Committee has received over 150 memoranda from individuals, groups, and faith-based organizations and has programmed to hear 10 petitions each week.

The Bill, since its introduction last July by eight Members of Parliament (MPs) from both sides, has generated numerous comments and reactions from both proponents and opponents, including legal luminaries and academics.

However, both sides of the House have indicated their readiness to outlaw the Lesbian, Gay, Bisexual, Transgender, Queer and Intersex (LGBTQI ) practices in the country based on its culture, morality and values.

The Speaker of the House, Mr Alban Bagbin, while sticking to the position of outlawing the practice, has, however, indicated that the House would not engage in filibustering the proposed piece of legislation.

He further indicated that the House would conduct an open hearing into the Bill and a vote on the Bill would be done publicly.

2022 Budget: Government to complete 5,000 projects under Poverty Eradication Programme in 2022

2022 Budget: Government to complete 5,000 projects under Poverty Eradication Programme in 2022

Africa can’t outsource her health to the world – AfDB boss

‘The headteacher is one of us, we’ve forgiven him’ – Families of 9 drowned students