Finance Minister, Ken Ofori Atta, and his wife, Angela through their “Ken and Angela Foundation” under the auspices of the Okyenhene Osagyefuo Amoatia Ofori Panin has handed over a two-storey doctors’ flat to the Kyebi Government hospital.

The two-storey doctors’ accommodation comprises three two-bedroom flats and three single room self-contained apartments at the heart of Kyebi in the Abuakwa South Municipality of the Eastern Region is to curb the accommodation challenges that have turned many newly posted doctors away from the facility.

The Kyebi Government Hospital has for a very long time been battling with accommodation challenges for newly posted medical officers and other health workers assigned to the district.

The situation has compelled many doctors to reject posting to Kyebi Government hospital, the few who accept postings are compelled to stay way away from kyebi and commute to work.

As a result,  the Ken and Angela Foundation constructed the doctors’ flat and handed it over to solve the accommodation problems.
Speaking at the commissioning and handing over ceremony of the ‘Osagyefuo Amoatia Doctors Flat’, Ahene Nanahene Barimah Kwaku Dua hinted that, quality health care is a fundamental requirement of every civilized society.

However, quality healthcare is anchored on the kind of dignity and respect society gives to healthcare personnel coupled with the availability of medical equipment.

He said lack of accommodation has been a hindrance to quality health care in the Akyem Abuakwa capital.

Barima Kwaku Dua believes the provision of the doctors flat will help reduce the accommodation challenges of the Kyebi Government hospital and ensure quality health care for the people.

He said the handing over of the doctors’ flat will end the syndrome of no accommodation which scares many medical officers away from the Royal capital of Akyem Abuakwa. 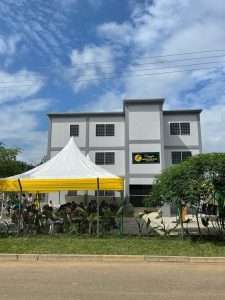 He demanded a very good maintenance culture from the hospital.

The Medical Director at the Kyebi Government Hospital, Dr Nii Darko Duodu who received the keys on behalf of the hospital noted that two out of the four medical officers are housed in temporary accommodation outside Kyebi whiles the dental officer has not started work due to housing problems.

According to him, another medical staff is still struggling with accommodation,  making their work very difficult, adding that, amid this frustration,  personnel has dedicated themselves to work.

He called on stakeholders to help them put up a staff village on a 10-acre plot donated to the hospital by the Okyeman Council to bring a lasting solution to the accommodation problems.

Supreme Court is not interfering in Parliamentary affairs – Lawyer

Bawumia will be Ghana’s next president – Annoh-Dompreh declares

E-Levy has taken off – Majority in Parliament

Supreme Court is not interfering in Parliamentary affairs – Lawyer

Bawumia will be Ghana’s next president – Annoh-Dompreh declares

E-Levy has taken off – Majority in Parliament

‘We have only two functional vehicles nationwide’ - Rent Control Department