The President of the Republic, Nana Addo Dankwa Akufo-Addo, has commissioned Phase II of the Accra Compost and Recycling Plant (ACARP), executed by the Jospong Group and Partners.

Speaking at the commissioning ceremony on Thursday, 21 st October 2021, President Akufo-Addo stated that as a result of increased urbanisation, particularly in the country’s major cities, the capacity of the current 600-ton plant cannot cope with the increased municipal solid waste generated daily within the city of Accra.

“It is for this reason that Jospong Group and Partners, with support from Government, embarked on expanding the existing facility from six hundred (600) tonnes per day to two thousand (2,000) tonnes per day,” the President said.

Phase II of the plant is well-equipped with modern teaching and learning facilities, as well as ultra-modern laboratories for training and research into modern effective processing and recycling technologies.

The completion of this facility, according to the President, will bring immense benefits to managing effectively and efficiently the increased solid waste in a more environmentally friendly and sustainable manner.

Historically, the disposal of solid waste has remained a challenge, especially in the urban areas in this country, creating the numerous sanitation challenges confronting our nation. Elsewhere, integrated waste management has been adopted as one critical intervention in the management of municipal solid waste.

However, the President noted that the establishment of an efficient integrated waste management facility requires huge financial outlay, and, with the competing needs of other sectors of the economy on the government budget, it is becoming increasingly difficult for Government alone to shoulder this responsibility.

“It is for this reason that, on the assumption of office, my government committed to addressing this menace to transform Ghana to be one of the cleanest countries in Africa. In this regard, the Government has taken the requisite steps to create the enabling environment and framework for the private sector to partner with the government in finding lasting solutions to this herculean challenge,” he said.

President Akufo-Addo continued, “It is important also to note that, as a result of the huge capital requirement to establish infrastructure for the management of solid waste, most private sector players have been reluctant to enter into this space. I am glad and fortunate that Jospong Group and Partners have entered this space to partner Government to assist us in addressing the sanitation situation.”

Other benefits to be derived from the facility, the President said, include the production of organic compost for horticultural and agronomical purposes to boost agricultural production and the Programme for Planting for Foods and Jobs.

Additionally, the plant, he indicated, would create job opportunities for some three hundred (300) persons in various capacities on a full and part-time basis, which is one of the key priorities of the government, and will translate into an improved standard of living for these workers and their families.

As co-Chair of the Group of Eminent Advocates for the 2030 United Nations Sustainable Development Goals, President Akufo-Addo noted that “it is heartwarming to note that the execution of this project will help realise some of the targets under SDG 6, which demands that we provide clean water and sanitation for all”.

In furtherance of this, the President said that his government is collaborating with Jospong Group of Companies and Partners to implement the Integrated Recycling and Compost Plants in all the sixteen (16) regions of the country, to help address the prevailing sanitation challenges.

President Akufo-Addo revealed also that Government, in the future, is considering collaborating further with the private sector to provide sanitation infrastructure for the production of refuse-derived fuel in commercial quantities; medical waste processing; waste to energy facility; industrial waste processing; and e-waste processing. 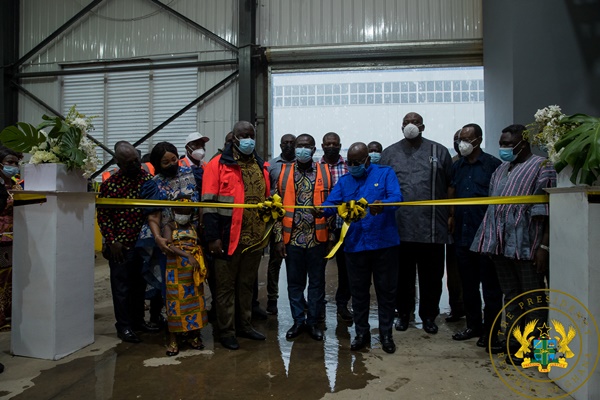 Police foil attack on motorists, gun down one robber at Obuasi