The President of the Republic, Nana Addo Dankwa Akufo-Addo, will from Monday, 18 th October 2021, begin a two-day tour of the Central Region, as part of his annual working visits to the sixteen (16) Regions of the country.

President Akufo-Addo’s itinerary will involve the commissioning and inspection of projects under the Government’s 1-District-1-Factory initiative in furtherance of his industrialisation agenda, as well as the inspection of ongoing road projects in the Region. He will also visit and interact with traditional authorities in the respective communities he will visit.

On Monday, 18th October, the President is expected to inspect engineering laboratories and workshops constructed by the Ministry of Education and the Council for Technical and Vocational Education and Training, located at the Cape Coast Technical University; and will proceed to pay a courtesy call on Chiefs of the Oguaa Traditional Area.

On Tuesday, President Akufo-Addo’s working visit will see him paying a courtesy call on the Chiefs of Hemang Lower Denkyira; cutting the sod cutting for the construction of the Hemang-Nsutem Cocoa Road, as well as commissioning Central Oil Mills, a company operating under Government’s 1-District-1-Factory initiative, located in Assin Jukwa.

In Winneba, in the Effutu Constituency, the President will commission several projects including a community centre, health facility, a library, and the Museum of Effutu Culture.

The tour will end with the commissioning of a lubricant factory, also under the 1D1F initiative, at Gomoa Akotsi Fetteh Junction in the Gomoa East constituency. 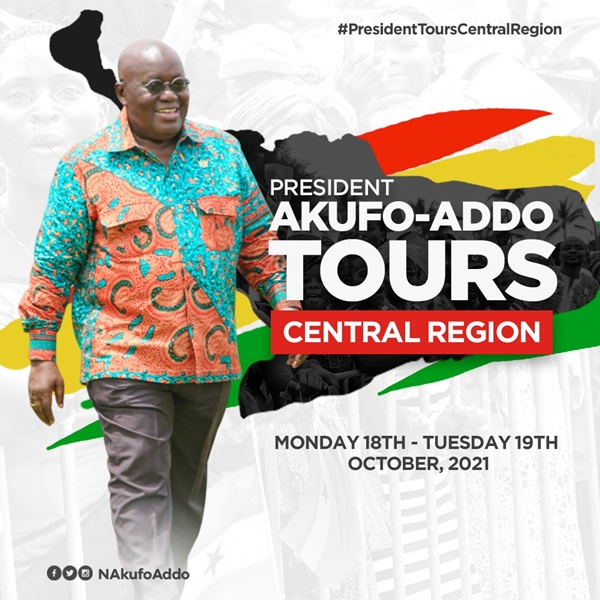 I’ve not ignored the economy, digitising will strengthen it – VP Bawumia

I’ve not ignored the economy, digitising will strengthen it – VP Bawumia

Speaker of Parliament admits motion for probe into COVID-19 expenditure