The suspect who describes himself on social media as “a doctor by profession and a gospel [sic] minister by calling,” was caught on video raping some female clients who had visited his facility for medical attention.

The video also revealed how he connived with state officials to acquire fraudulent certificates from the Traditional Medicine Practice Council (TMPC).

The TMPC in response to the report said it had given Jonathan Ohene Nkunim and his facility two licences. The TMPC said it gave him a licence as a “Herbal Medicine Practitioner” and “that of his facility as an Indigenous Facility. “The two licences would expire on 30th May 2021,” the letter signed by the TMPC director of administration, Nelson Menorkpor, said. 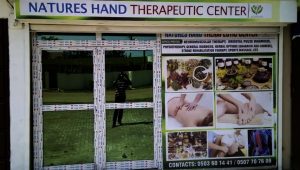 “According to our records, T/Dr. Ohene Nkunim is not a Doctor of Alternative Medicine but a Herbal Medicine Practitioner,” the letter emphasised.

On the scope of practice authorised by the licences, the TMPC letter said “he can only work generally on a patient using traditional medicine.”

However, the expose indicated that checks with the Odorkor Divisional Police Command, which oversees the operations of the Gbawe Police, also revealed that three suspects were being investigated on the same case.

The disputed license was duly signed by the registrar of TMPC, Torgbuiga Yaka IV. But the licence that was issued to Jonathan Ohene Nkunim by the TMPC, had the same serial number as the one that had been issued to another alternative medicine practitioner named Dora Ntiamoah, a female, leaving a contention over who was issued the fraudulent license.

After being cautioned on the charge of rape and taking witness statements, including one from his victim.

Put before the Kaneshie District Court, “Dr.” Akunim was charged with rape and was denied his bail plea.

Demand for receipts after payment to police – Police Commander

Demand for receipts after payment to police – Police Commander

Nothing wrong with prudent purchase of new presidential jet – Mpianim

UTAG to call off strike

US NGO partners Ayimedu foundation in the fight against human trafficking