The Tepa Divisional Police Command has smoked out a notorious armed robber who has been terrorising residents of Asuadee Community and its environs in the Ahafo Ano District of the Ashanti Region.

Suspect Emmanuel Kofi Oko Afari who has been on police wanted list for a long time for his alleged involvement in series of armed robberies was arrested at his hideout at Asuadee. 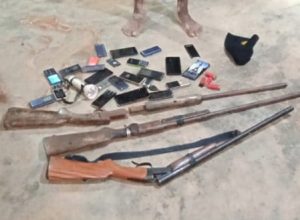 According to him, the intelligence led to the arrest of the suspect who is a wanted armed robber in series of robberies within Ahafo Ano Division and efforts were being made to effect his arrest.

Chief Superintendent Kwakye further stated that suspect later led police to a bush at the outskirts of Biema community near Adugyama and showed two additional single barrel guns which he had hidden in the bush.

In addition to that, the Commander stressed that suspect also led police to a cocoa farm near Nsutam to show police where he and a friend had hidden a pistol that could not be found.

He noted that the suspect disclosed to police during interrogation that he had an accomplice whose name he mentioned as Kwabena Gyasi who often travels from Juaboso, Western North Region to join him for their robbery operations.

Meanwhile, suspect has been detained to be arraigned before court as efforts are underway to arrest his accomplice to assist in investigation.

President Akufo-Addo to deputy ministers: Justify your selection, be loyal

President Akufo-Addo to deputy ministers: Justify your selection, be loyal

No more tolls on all public roads – Finance Minister