“In my humble opinion, PAPSS is an African solution to an African problem and it is the most practical and most important achievement in payment systems integration on the African continent since independence from colonial rule.

“We as Africans should be very proud of this historic feat which demonstrates how the application of digital technology can solve many problems we are facing individually and collectively.”

These were the words of the Vice President, Dr. Mahamudu Bawumia when he joined other political, financial, and Fintech leaders from across the African continent in Accra for the commercial launch of the Pan-African Payment and Settlement System (PAPSS) on Thursday, January 13, 2022.

The Pan-African Payment and Settlement System is a cross-border, financial market infrastructure instantly connecting payment transactions across Africa, eliminating the need to route such payments through third-party banks usually located outside the continent.

Among others, it is designed to enable instant and secure payments between African banks, payment service providers, and other financial market infrastructure; enable instant and near-instant payments made by both originators and beneficiaries in their local currencies anywhere in Africa; and simplify the historical complexities and costs of making payments across Africa’s borders, providing operational efficiencies that open up vast economic opportunities.

Available trade statistics provided by the African Union in its Annual Trade Report of the year 2020 indicate that Intra-African trade remains low with an average of 13% for intra-imports and 20% for intra-exports over the period of the last seven years.

These trade payments and relationships are also characterized by settlements involving foreign exchange use which sometimes put pressure on African currencies coupled with issues relating to the speed of transactions, convenience, and high cost of these transactions.

Officials of the Afreximbank and the African Continental Free Trade Area (AfCFTA), lead promoters of PAPSS, say the operationalization of the payment system will benefit all stakeholders, from governments, banks, and payment providers to the end customers; corporates, small enterprises, and individuals removing the challenge of dealing with 42 different countries and 4 exchange systems. Its rollout is expected to save banks on the continent some $5 billion in transaction fees.

The PAPSS, which will allow the Member States to transfer funds within Africa on the same day and at a lower cost, is set to benefit Africa’s exporters and importers by providing a faster, safe and secure transfer of funds, Vice President Bawumia explained.

“Businesses and traders would no longer have to spend days waiting for the confirmation or receipt of funds to facilitate trade as payments will be cleared and settled in real-time. It provides a simplified process that reduces the costs and complexities of foreign exchange for cross-border transactions between African markets.

“The biggest beneficiaries of PAPSS will be small and medium-sized businesses, investors who make high-value payments across the borders and consumers who have been using informal means to make cross border payments.”

The Vice President, who had urged Governors and other stakeholders to speed up the PAPSS roll-out and integration process when he addressed a virtual annual Conference of the Association of African Central Banks in November 2021, expressed delight that the six-year-old dream had finally been achieved.

“Over the years, there has been tremendous emphasis by central banks on the development of domestic payments systems such as Real-Time Gross Settlement (RTGs), Automated Clearing House (ACH), Securities Settlement System (SSS), Automated Check Processing System and a National Switch, etc. However, there has been less focus on cross-border or Intra African payments. Notwithstanding their significance, intra African payments faced various challenges including cost, access, speed, and transparency.

“Broadly, inadequate trade-related infrastructure on the African continent and under-developed cross-border payment and settlement systems, as well as settlement in foreign currency, have culminated in the persistence of informal trade in the Sub-Sahara Africa region. We are now in a better position to reduce this trade informality by coming together to provide the required integrated payments infrastructures and systems.

“As you are all aware, the underlying motive behind our integration scheme is the expectation that, through collaborative efforts, participating countries in the integration programs would generate maximum socio-economic benefits for their citizens in the sub-region. Regional integration undoubtedly is an efficient tool for overcoming the constraints imposed by the nature and size of individual national markets. It has been realized that if production of goods and services is carried out in an enlarged regional economic space, there is a greater chance of achieving substantial economic benefit.”

Mike Ogbalu III, the first CEO of PAPSS, underscored the importance of the payment system, emphasizing that it will “eliminate the artificial borders that have militated against intra-African trade and our collective effort to integrate our economies. It is a very welcome development indeed.” 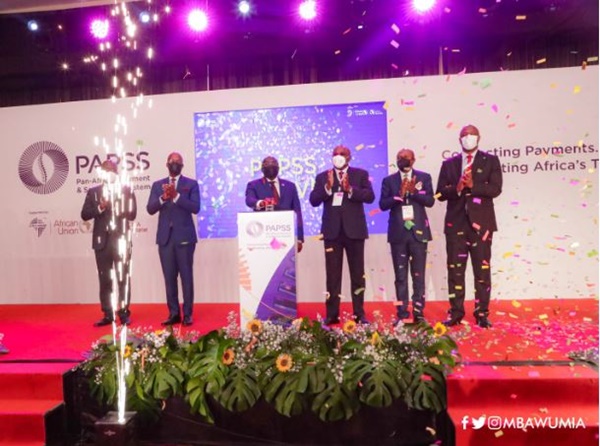