This appointment follows President Akufo-Addo’s announcement when he paid a courtesy call on the Yoo Naa Abdulai Andani during his tour of the Northern region on Saturday, August 7, 2021.

“Very soon you will hear an announcement from me because I think that central government and various institutions of instilled central their work can be improved by the presence of some traditional rulers in our work and I intend very soon to announce the participation of both yourself(Yoo Naa) and your brother Mion Lana Abdulai Mahamadu in the work of my government .” 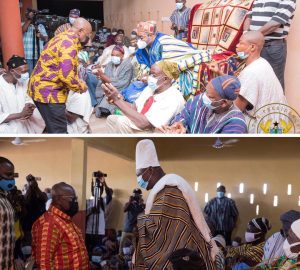 The Northern Regional Executive Committee of the New Patriotic Party (NPP) led by its regional chairman, Mohammed Baantimah Adam Samba congratulated the chiefs and thanked President Akufo-Addo for their appointments.

He asked for Allah’s blessings to give the chiefs the strength and wisdom to contribute their quota in the running of the appointed state institutions.

2022 Budget: “America is in Ghana”- Yaw Adutwum to Minority

2022 Budget: “America is in Ghana”- Yaw Adutwum to Minority

One out of four marriages registered 2021 at AMA collapsed